HISTORY OF A KING

Historic King Mansion was built in 1923 for Horace B. King, a corporate tax attorney, and his family. King, born in 1883, grew up near Erie, Pennsylvania with his father. He graduated from high school early and went on to work as a teacher in one-room schools for three years, until he went to Bucknell University and later studied law at Dickinson College in Carlisle, Pa. While in school, King received several offers to play professional baseball. He declined them, in order to join Senator James Davis on a five-year tour to organize Moose Lodges across the country.

King met his future wife, Rose Vanderbilt McKeehan, while attending Dickinson College. Rose lived across the street from the university and attended Drexel in Philadelphia, Pa. They married on August 30th, 1911, in Rose’s family’s home. In 1915, the young couple moved to Harrisburg where Mr. King opened a corporate tax law office (Barnitz & King) in the Berger Building at Third and Market Street. King was so close to his home that it wasn’t unusual to see him walking to work in the mornings, rain or shine.

On March 15, 1923, workers broke ground on the construction of the mansion. The architect, Frank Gordon Fahnestock Jr., was an up-and-coming star who had also designed Temple Ohev Sholom (2345 North Front. St.), William Penn Hotel (327 Market St.), and many churches in the area. The general contractor, James Albert McKelvy, who also built the Harrisburg Public Library, had estimated the cost of construction to be between $150,000 and $200,000.

Horace then moved into the mansion with his wife Rose, their six children (five boys and one girl), Rose’s mother, as well as a few servants. The family settled in the house in 1925, even though construction wouldn’t be finished until the spring of 1926. The mansion was composed of Indiana Limestone, to create a Mediterranean-inspired style which spread throughout the entire mansion. All of the family’s furniture was custom designed to fit the mansion’s unique interior architecture.

CREATING THE STANDARD OF LIVING

Historic King Mansion was one of the first of its kind when built, and its vast rooms and size drew attention as the new standard of living. The mansion was a showcase on the riverfront, while vendors and suppliers alike were anxious to be involved with the estate, both to experience it, and gain bragging rights among their peers.

King’s children had also experienced this high standard of living. The basement included a swimming pool, billiard room, and a two-lane bowling alley, which was later converted into a shooting range. A tennis court, now the current parking lot, also provided active enjoyment for the family. To top it off, there was a gymnasium for indoor sports, a studio, library, and a conservatory.

After Mr. King passed away in 1938, and the rest of King’s family had moved out, the mansion was passed from company to company, with each company adopting a different approach on how to use the venue. At first, the mansion was used as a hostess house (a rental space for events), and then a convalescent home (a home for sick residents). More recently, it has been used as a space for an insurance company and an e-commerce/internet marketing office space.

Many renovations have been completed over the years in order to update the mansion including converting the tennis court to the current parking lot. Other improvements and renovations were made to the second floor during K&W Engineers & Consultants’ recent occupation. Today, Historic King Mansion is being renovated to serve as a unique downtown event space for Central Pennsylvania. The riverfront estate has already been utilized for corporate and social events and plans to host many more special occasions including weddings, bar/bat mitzvahs, private parties, and a variety of special celebrations. 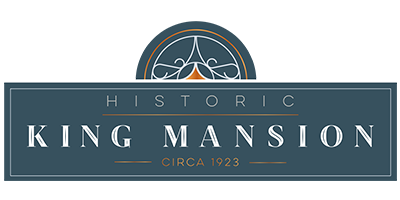